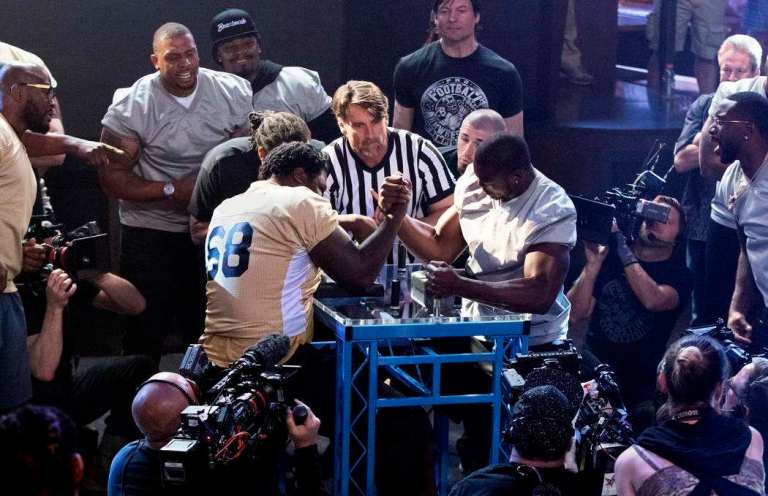 This is a story about how, long before I ever met Moe or Todd, I got hustled in Las Vegas by a single plane golfer.

The scene is the first tee at the former Desert Inn golf course. I’m there on a break from a video shoot at Caesar’s Palace, one of my ESPN career lowlights— producing NFL All-Star Arm Wrestling!

I get there during a half-day lull, allowing the football behemoths some promised rec time that mostly consisted of 300 pounders cannonballing into the resort’s pool—tsunamis ensued.

So, to continue, one of the guys, a Cleveland Browns linebacker overhears me asking event promoter, Tony Celeste to arrange for a tee time. He asks if I would mind joiners, saying he and his wife would like to play.

I’m going to keep his and her identity under wraps for a couple of reasons. One is in researching for this telling, I see now that NFL has penalized players for participating in this event, though the one I’m describing took place long before that. The second reason will unfold as the story does.

At the appointed tee time he and I show up at the first tee, and she’s not there.

“She’ll be here,” he assures me. In the meantime, we both hit decent drives from the big boy tees, hitting the short grass, certainly over 200 yards, or better. In moments she appears, resplendent in her maternity clothes and sporting his very soon to be junior.

I’ll never forget watching the airborne parabola that was her golf ball’s flight as it passed mine in the air, bounding a dozen or more yards past it—from the same tees we played! I’ll also never forget the twinkle in his eyes when he apologized for not telling me she captained her PAC 10 college golf team!

Today, I will never forget seeing that first single plane golf swing—a high hands set up commanded by juniors’ abdominal prominence. I’ve seen thousands, since, including the best from Moe and Todd, but that one is indelible.

Of course, also, today, celebrating Moe’s prowess captivates me and I’m privileged to be part of the team assembling that story for posterity, documenting his life in The Feeling of Greatness. I’d like to invite to join us too. Please do.  Click here.