Bryson DeChambeau has riveted spectators with his unique golf swing and style. He has introduced the golf world to the Single Plane address position that I have promoted for years. It is similar to Moe Norman in many ways but I still think Bryson’s swing can be simplified even more and Moe’s golf swing is definitely easier on the back.

If you are to simplify the golf swing the following must occur.

One thing that has so many people intrigued about Bryson is his address position. It is very similar to Moe’s address yet Bryson is more vertical (upright). Bryson is over 6 feet tall while Moe was 5’7″. This accounts for some of the lie angle difference but not all of it.

At address, Bryson has less secondary spine angle, side-bend, than Moe. This leads to straightening the lead leg, a lifting of the body and an over-rotation of the torso through impact. 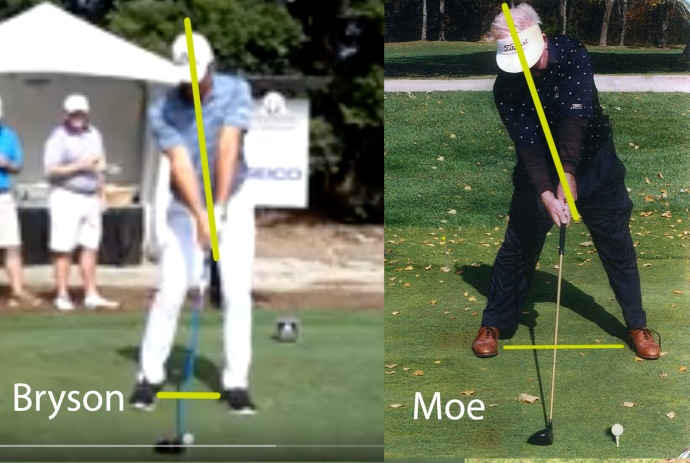 While some of my analysis might seem critical to Bryson, I must look at this from the perspective of safety and stress on the body. The average age of a golfer in the United States is 59 years old. Not many are flexible and healthy enough to copy Bryson’s 25-year-old rotational movements. Therefore, I must take a biomechanical approach to see the cause and effects of his motion and what it does to his body when he rotates and produces speed.

Golf is fun if you don’t hurt. Therefore, my goal is to do produce maximum speed and move the body safely to reduce injury.

If you look at Moe’s release you can see that he makes a downward motion into a flexed lead leg while Bryson straightens the lead leg. Moe’s flexed lead leg allows him to take the stress away from the lower back by bracing into the leg, not the lower back. Bryson looks as though he is pushing up into the pelvis which would be difficult and painful for most people. 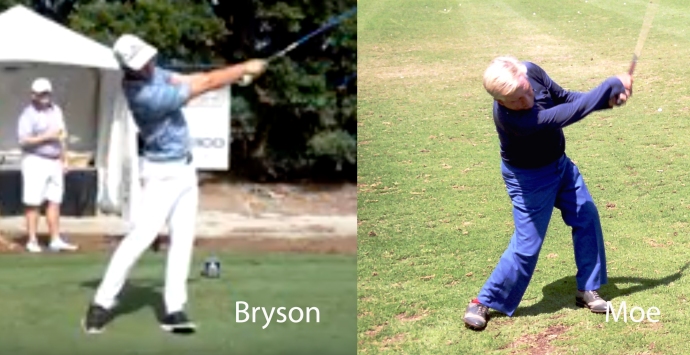 Moe’s lead arm bends as the arms release through impact. This reduces the rotation of the upper body. You can see how much Bryson rotates his torso into his release and finish as his lead arm pushes on his shoulder. I would be concerned about Bryson’s back from this rotational and compression.

Moe is able to swing the club through without as much torso rotation. You can also notice how Bryson’s lead foot is rotating at the ankle in his release, showing how his straightened leg is rotating the foot. I would be concerned about this damaging his knee and his ankle – similar to Tiger Woods.

Moe’s address position and spine tilt allowed him to move down into the golf ball rather than UP and away from it into impact. Moe moved down because he struck the ball hitting into a flexed lead knee where the lead leg is strong and stable. By moving the knee down, the pelvis also moves down, reducing the compression on the lower back. This is the back-saving movement that is missing in so many modern golf swings.

How would I help Bryson improve?

First, I would widen his stance with his driver. This would create a shallow path through the ball and increase his driving consistency as well as take some stress from his back.

Finally, I would teach him to produce speed into a flexed lead knee – to save his back.

Bryson’s swing might work if your 25 years old and have a daily fitness regimen. If he trains well and stays healthy and is able to avoid an occasional back spasm, he will have some successful years.

In conclusion, I enjoy watching Bryson’s version of the Single Plane Golf Swing on the PGA Tour. It validates much of what I have taught for over twenty years. I still think that the talent of Bryson, his practice habits and youth cannot be overlooked as many might begin to look at him as a model.