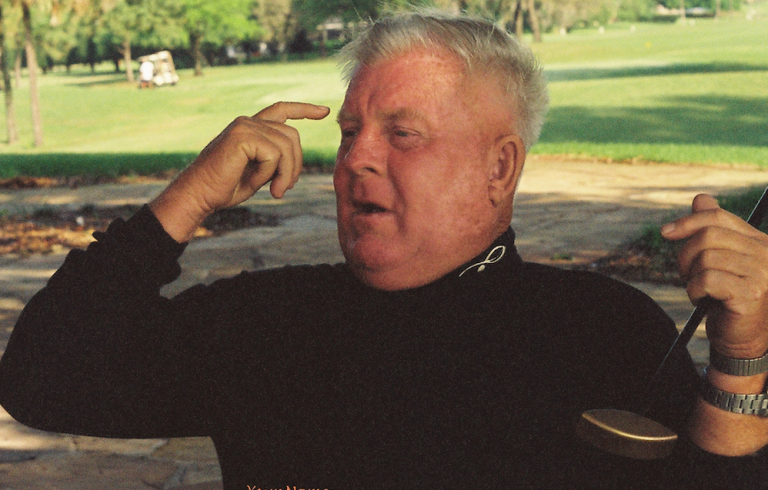 I’m probably the only golfer who got hell for playing, and I got hell. Couldn’t bring my clubs in the house when I was 15, 16 years old.

My dad was fat. I was skinny. So I had to dig a hole under the front porch and stick them there so he couldn’t reach them.

But as soon as I started winning, now, bring them in the parlor. When I began to win TV sets, fridges and power lawn mowers— two a week I was winning — then that was when I found out about people.

Q: How old were you when you left home?

Moe: Seventeen. Haven’t been back since.

Q: Did you have a job when you left?

But, I got fired from every job I had. Cause I had tournaments during the week. No such saying I was sick because I shoot 65 and win so that I couldn’t lie.

Q: Didn’t you set up pins in a bowling alley?

Moe: That’s a winter job where I saved like a son-of-a-gun and the first of May there were no more bowling leagues, and I could play May, June, July, and August. Hit 800 balls and play 54 holes.

Q: What’s the most fun you’ve had playing golf. Is there such a thing as around you’ve enjoyed more than others?

Moe: Well, the first win of your life, the first time I won The Canadian National. That was nice. Took me 39 holes to win it.  In the finals. I birdied the third hole at The Calgary Country Club, the toughest on the course, to win it. So I won it in style. The next year I walked away with it. It wasn’t even close.

Moe: I’m the only guy they ever kicked out of amateurs. That was back in 1957. I was supposed to play as an amateur in The Americas Cup matches.

I got a letter at home saying how glad they were to have me represent Canada in The Americas Cup matches. They sent me my airplane ticket. They sent me my jacket. I went and got my smallpox shot and then, 4 days before they said ‘we had a general meeting and feel you’re not an amateur anymore. Please send back your plane ticket. Please send back your jacket. They didn’t call me in or nothing.

The public knew before I did, cause when I woke up that morning my mother said ‘there are 20 reporters on the front lawn, what have you done?’

Then someone said, ‘they just kicked you out of amateur.’ I just about fell over.

I’ve gone through it. Who’s done more for golf in Canada than this guy? Who’s got the most color?

Who put the most laughs in the game, winning tournaments? This guy. Playing holes backward, stuff like that. Hitting balls in buckets?

Q: How do you handle being more famous now?

Q: You’ll find a way to handle it.

Moe: I hope you’re right. It’s like eating an apple. What do you do? Eat the whole apple or just piece by piece.

Q: Well, you may have a bunch of good-looking women chasing you, Moe.

Moe: That’s what I’m afraid of. Everything is happening now. Why didn’t it happen when I was forty-five? What a nice feeling to walk up to the first tee and hear: ‘Here comes the Hall of Famer.’

I would want to show you why I was put in the Hall of Fame. Shoot a 62 shoot a 31, 31. They recognize me now when I don’t play anymore. I just do clinics, like you saw today.

Q: You enjoy doing those clinics, don’t you?

Moe: Oh, yes. Yes. Cause this needs to be passed on to future generations. I realize that now. The world finally realizes I’ve got the best move by far, ever in golf.

I’m the only person with a 365 days a year swing. Everybody else is 300. The other 65 days its’ the army song: left, right, left right. Mine is straight down the middle.

Moe: When is the world finally going to change for the right? That’s what I can’t understand. When are we going to figure out why water is wet? Why are there branches on a tree? Why have we got two eyes, two ears, and only one mouth?

When is the world going to wake up and understand what hold the clouds up? Why can a bird sing?

It’s not what the world can give to you. It’s what can you give it. That’s the way you get ahead in the world. What can you offer the world?

I’m lucky. I can give the world talent. I can explain it. I can tell it. I can show it to people, which is what I love doing. I just love it.

Q: Whatever made you hold the golf club in the palm of your hand?

Moe: I went to this carpenter. ‘First of all,’ I said, ‘don’t think I am trying to get your job because I’m not.’

Then I said to him, ‘what’s your hammer, dark or light?’

He said heavy, because it won’t waver as much, won’t bend as many nails.

Moe: The palm stays dead still. Look how fast you move your fingers. Look, look, look. They move around like a jumping beam.

Never in the fingers. In the palm. Fingers are live. Palms are dead.