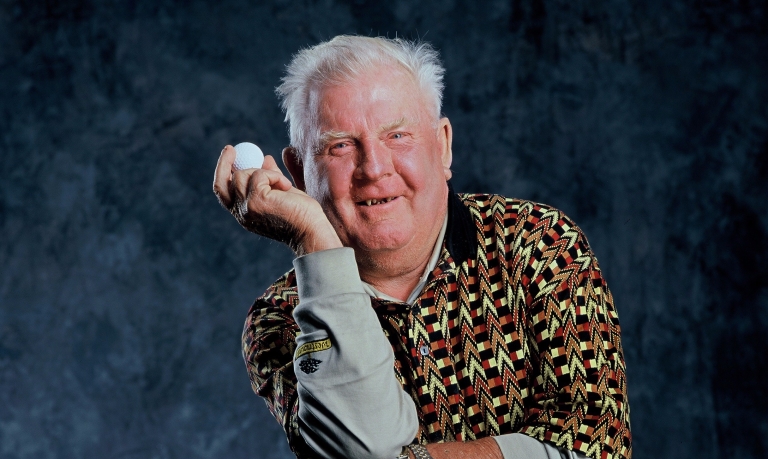 While Moe hits fairways and greens and whistles “Singing in the Rain” most golfers hack their way around to a tune of “Trouble in Paradise”.    It is a wonder that some golfers keep singing at all.  I believe that Moe’s success and ability to simply the game came from following the Rhythm of Frank Sinatra’s “My Way”.

If you ever watch Moe play golf, you would notice that Moe swung the club “his way”.  He claimed never to have a lesson even though he had a teacher Lloyd Tucker, the head professional at Rockway Golf Club in Kitchener Ontario Canada who “left him alone” as long as he practiced everyday.  Thank goodness for Mr. Tucker’s ability to see Moe’s gifts and not get in the way.  Moe claims to have discovered and mastered his golf swing in 5 years between the ages of 14 and 19. It makes us wonder, just what exactly went on in those years?

There was a field at Rockway that spanned about 230 yards between holes.  Moe would spend time hitting balls back-and-forth.  It makes you wonder what was going through his head.

When I met Moe in 1994, that particularly interested me.  After watching him demonstrate his perfect ball-striking, I asked him. “How did you learn that?”.

“Hard work, you can’t buy it” he quipped.   I soon realized that he didn’t know his own secrets. I had to dig them out over time with probing questions.

”Where do you place your left hand?”,” How do I get my clubface more on plane?”, ”Why do you place the club so far behind the ball?”. I learned that his swing was as paradoxical as his life.  On one hand he would explain his golf swing with cryptic adjectives making me wonder if I was stupid or he was crazy.  “I play into my legs and let my swing balance me”, “I swing like a pendulum, no twisting or turning”.  On the other hand, Moe was a genius describing his swing with feelings.  I think he developed his explanations out of necessity and the fact that all these types of questions too complex to be answered simply.  “I squeeze the club like I’m drawing blood with my left hand, my right hand is along for the ride” and “I have a vertical drop in my downswing, I feel like the club is going behind me, way behind me”. He even stole some of his feelings from others like his longtime PGA teacher and friend Paul Bertholy; “Buckle, Sit, Slide and Bump” – a description for his lower body movement. And Rod and Claw to describe his lead arm and trail arm position.

I soon learned that if Moe had swing secrets, he didn’t understand them.  His secrets were really  just a pure set of unique fundamentals that have proven to be an easier way. When asked if anyone could learn his swing, Moe would sometimes way that he was the only one.  Other times he was say “Sure, it’s so simple”.  Eventually Moe would sum everything up calling his swing “The Feeling of Greatness”.

The problem with Moe’s “Feeling of Greatness” is that asking Moe to describe it would be similar to asking how Pavorotti he sings. There is really no way to describe it, not in any sensible way that makes it applicable to the average person.  Over the ten years of practicing and playing with Moe, I learned that maybe Moe didn’t have any secrets, maybe he was the secret.  A guy that discovered an easier golf swing that could be copied.

Moe’s golf swing, when copied, allows the body to strike a golf ball with less movement and effort.  Certain mechanical traits, unique to Moe such as a Single Plane club at address, a flexed lead knee at impact keep stress off of the body too.

While he might not have known exactly why he did what he did, he definitely knew that what to do.  The conclusion I have come to is this:  Do not take anything Moe did for granted and simply follow Moe’s rules. By doing this golf gets easier and you develop your own feelings.  Occasionally you feel what Moe felt and golf becomes a walk in the park.