When I met Moe Norman in 1994, I asked him how he learned to swing with such amazing proficiency and become the greatest ball-striker in the world. He said, “Belief in Yourself”. I initially thought that he meant that I must have self-confidence. I was wrong.

I had an interesting conversation with Shawn Humphries -a good friend who specializes in human performance. Shawn said that Moe’s comment meant much more than to have self-confidence. He said that it actually meant “Self Image” and that we carry our self-image into everything we do.

When Moe told me to believe in myself, what he meant was that I had to develop my self-image into being a great ball-striker. Self-confidence and self-image are very different. Understanding this makes all of the difference.

Since I have accomplished certain shots in the past, I have a conscious image stored in my mind that represents my abilities. When I perform, I play to that image of my past. In actuality, this is why I don’t play tournaments anymore because my self-image of abilities from the past doesn’t match my present ability. (Right now I actually think I am a better player than I am). But consciously I know that I haven’t practiced much, therefore, I consciously know that physical ability isn’t ready to match my self-image of it. 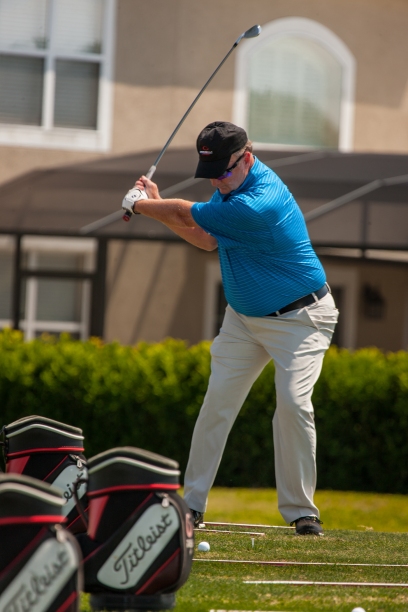 The million-dollar question: “What comes first, success or a self-image of success”? The answer might surprise you.

Shawn says that self-image comes before confidence which leads to success. This thought alone is life changing. It makes me recall the story about Bill Gates who sold a software company a program for their computers – even though he had not developed it yet.

My mother would often tell me a story about a successful entrepreneur who would attend business meetings hiring limousines even though at the time he couldn’t afford it. When asked why he did this, he would say, that he was “acting as if he was already successful”. He wanted to feel be a success. What he was really doing is creating a self-image of success. Later, his success would catch up and he founded the Sylvan Learning Centers taking his company public in 1983.

Self-image is the same as using your imagination to create a new “picture” of yourself. If you wanted to lose weight and you start running on a treadmill every morning, at some deep level, you believe that running will help you achieve your new vision of a thinner and healthier you. Your “thin” vision creates a new behavior and you take action. Your new behavior started with imagination.

But there is another way. If you imagine being thin and start acting as though you already are, inexplicably, the world creates a supportive environment. Act thin and you start eating, drinking and thinking like a thin person. How you think creates how you act and who you are.

A college team-mate Craig Perks used the same mental process to win the 2002 PGA Tour Players Championship. Years before, in 1988, I was playing with Craig in a College fund-raiser in Norman, Oklahoma. Craig wasn’t playing well, hitting a few shots so poorly that my father asked if Craig was “really” on the team. After the round, a few of the other players on the team asked him how he was playing. I recall him saying “I’ve never hit it better”. Craig never changed his self-image of a great ball-striker, even if at that moment he wasn’t hitting it well.

All of us carry a self-image with us in everything we do. Everything that we do is a learning experience to support our self-image. Golf students often carry a self-image of “I am bad at golf and the instructors need to help.” If I could give an important piece of advice to the students, I teach I would recommend developing a new image of already being a better golfer and that the instruction is simply a part of the process of learning. Act like a great golfer and you already become one. The skill-sets will catch up.

As Shawn says “Once you understand that everything that you do is to support your self-image, you start asking ‘what can I learn from that experience and what adjustment do I need to make’ to improve”. It all comes down your self-image. Moe said it often: “You are what you think about”.

My recommendation:  Believe in yourself and be careful about what you think about.