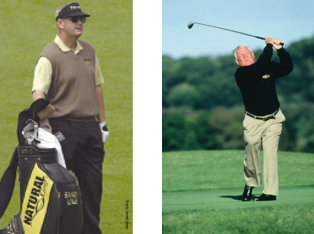 The day World Golf Hall of Famer, and a two-time major winner, Sandy Lyle, caddied for Moe Norman is indelibly recorded in my memory.

Actually, it wasn’t toting Moe’s clubs that Sandy did. It was more like shagging balls for him. Nevertheless, it was a heavy dose of R-E-S-P-E-C-T that Sandy accorded Moe.

I may have been one of a few people who witnessed the act. Let me set the stage for you.

Moe had cataract surgery a few days before and therefore was not in his usual place at the Natural Golf showcase booth at the Orlando PGA Merchandise show. Sandy was there in his place, having recently begun adapting parts of the swing Natural Golf modeled after Moe.

Here’s what I saw that morning in the halls of the expo:

Sandy was busy signing autographs for a line of fans anxious to collect a picture of him. I was standing back away from the crowd monitoring the activity. A long way down the aisle of booths, I spotted Moe meandering toward us wearing a pair cataract prescribed Roy Orbison style wrap around dark glasses.

As Moe neared the Natural Golf booth, he spied Sandy and quietly slipped away and moved toward a nearby another exhibitor which had set up a driving net in its space. After a moment, he sauntered into the booth and began fondling a driver.

Before long, he made a swing and the sound got Sandy’s attention, looking up from his signature desk. When he saw Moe, he excused himself and walked across the aisle and greeted Moe. They kibitzed and then Sandy began to shag the balls that Moe would hit, bending over to pick ’em up and then placing them on the matted tee for Moe to strike.

That went on for a while. After a bit, Todd Graves, Moe, Sandy, Larry Olson, Natural Golf president, and I adjourned to the rear of the green grass driving range at the nearby Marriott hotel and resort. That afternoon I watched as Moe and Sandy collaborated hitting buckets of balls.

Sandy went on to incorporate elements of Moe’s way into his way, took it to The Masters, The Open and with some success to the senior tours.

What was more important to me as an observer, was the unabashed sensitivity and respect Sandy showed Moe by shagging his balls and teeing them up for the greatest ball striker in the game so he wouldn’t have to bend over and jeopardize his recent eye surgery.