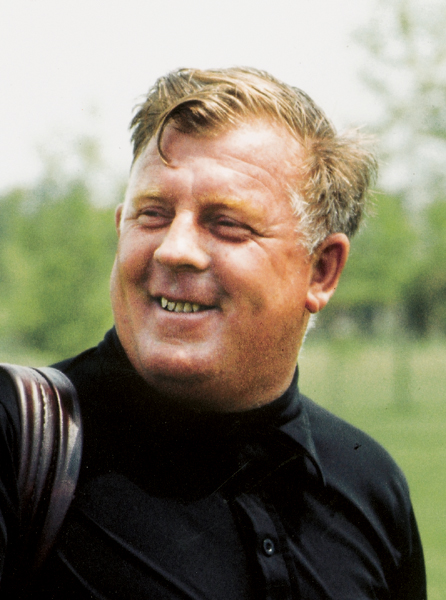 I met Moe in 1994. He was 64 years old.  Since that time I have become somewhat of a historian collecting photographs, memorabilia, and archival video – documenting Moe’s swing history.

Bobby Beechem, a member of this blog, asked me to comment on the differences I see in the pictures below. 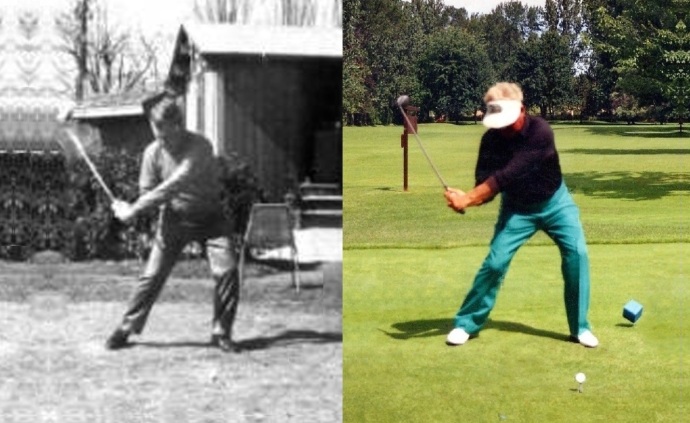 Actually, I am amazed mostly at the similarities, not the differences – especially in the flex of the first knee and the position of the arms and club.   Mechanically I don’t see any differences.  His stance might be slightly wider in his later years, but this could vary.

I also believe that there is a distinction between technique and motion where your motion could change, but your method can stay the same.  This is where I think many see that Moe’s swing motion changed as he aged but his technique remained the same.

Other than the apparent aging differences, most of the differences you would see in Moe’s swing motion would be visible range and flexibility.  This would be age related.  You merely lose mobility as you age.  I don’t necessarily consider this a mechanical / technique change at all.  Here is a photo of Moe at the top of his backing from the same years. 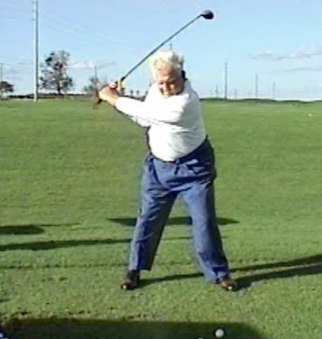 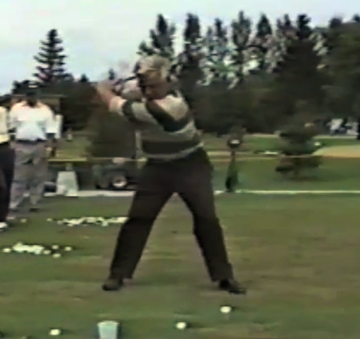 You can apparently see a noticeable difference in the distance the club and arms move in the backswing.  Moe’s younger body looks more mobile and elastic.  Nevertheless, I don’t see a difference in technique.

The bottom line is that Moe’s swing never changed, but he got older and gained weight.  Both of these factors limit our body’s mobility – causing changes in how much we move – not necessarily how.

Now you might state the obvious and say well, if your mobility changes your swing must change.   I would agree and also disagree.  I agree that your swing length shortens where your body doesn’t turn as much, and the club doesn’t move as fast.  However, mechanically I did not see Moe’s address position change nor did I know the fundamental movements change –  such as moving into the backswing, transition, downswing, and impact.

I don’t have the data to prove it, but I would wager a large sum that his body rotations at impact were the same at age 35 as they were at age 70.

His lead arm was slightly bent at the top of his swing when he was younger.

I don’t mind a slightly bent lead arm.  Yes, I said somewhat.  I think a slightly curved (relaxed) arm allows the body to pull the gun in transition (as opposed to when the arm is too rigid the arm stretches from the top).

When the arm is slightly relaxed, it also rotates more comfortable allowing the trailing arm to fold.   (Reed Howard and I often discuss the function of the first arm and have trained for his lead arm to bend slightly.)

Moe had more torso and pelvis turn in the backswing when he was young, and this decreased as he aged.

If you look at the video and pictures, this is obvious.  Moe’s reduced rotation cost him speed as he aged.  Some of this is due to weight gain as well.  While his mechanics didn’t change, his body did.

Rotation is the main ingredient for speed.  It’s not necessarily how much rotation but rather HOW your rotate.  Both the upper body and lower body rotate during the swing.  They sometimes turn together and then they separate where they move in opposite directions as well.  How well you switch and divide as you stay in posture are the keys to producing speed.

Speaking of posture – Moe stayed down longer through impact in his youth.

I once asked Moe for his key to great ball-striking.  He said, “I stay with it so long.” What he meant is that he remained in posture through impact and into release.  Moe’s Single Plane technique allowed him to keep his spine in the proper tilt through the ball – a key to getting through effects.

As Moe aged, he would be a bit more stood up through impact.  It was hardly noticeable, but again, this is part of aging and losing range of motion – notably in his hip flexibility and lower back.

What can we learn from Moe when it comes to aging and how it affects your swing?

I always ask the question “what can I learn?” when I discover something relevant.  Many of the students I teach are aging golfers.  I am becoming one myself.  Knowing that we are all going to age – we must understand the physical factors of how our bodies mobility affects our golf games.  Here are some significant takeaways which I will discuss in upcoming blog posts.

That’s it for now.  Thank you for the question, Bob.  If any of you have any questions or suggestions, please email me at toddg@moenormangolf.com.