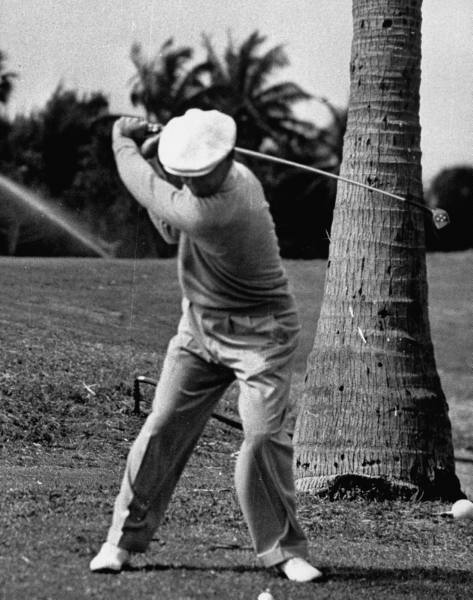 This picture paints a thousand words about the leverage in the backswing. I’m not talking about the how far the club has moved back but rather the position of the trail leg, lead knee, and tilt of his back.

Moe Norman often referred to him and Hogan as being the best. It is easy to see some similar mechanics in their motion.

When I look at this picture, I see power. I also want to throw the term “weight shift” out the window. You can see in this fraction of a moment in time during Hogans’ swing – he is transitioning from a braced trail leg into a fully flexed and braced lead knee. His lead foot is rotated out for his next move.

You can see the rotation of his torso, but his back is still tilted keeping his head well positioned behind the ball. I also love the width of his stance.

In this picture of Moe, you can see the same characteristics where the Trail leg is braced, the first knee is also bracing, and the back is tilted.

There is an incredibly important dynamic of this motion of the golf swing where, in a split second, the body braces for maximum rotation of pelvis and torso – while maintaining the supine position.

What can you learn from this picture?

Here are the keys:

Brace the trail leg into the backswing as you turn.

Maintain your Spine tilt into the backswing.

Rotate the lead foot at address.

As you know, I am a consummate student of the game and have always been impressed by the swing action of the best ball-strikers in the world. This great top of the backswing action is a perfect example.