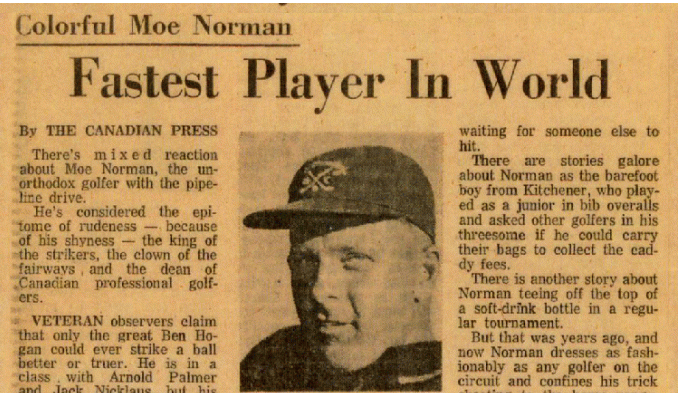 He’s considered the epitome of rudeness – because of his shyness- the king of the strikers, the clown of the fairways, and the dean of the Canadian professional golfers.

VETERANS observers claim that only the great Ben Hogan could ever strike a ball better or truer. He is in a class with Arnold Palmer and Jack Nicklaus, but his introverted personality has kept him from achieving fame outside Canada.

Besides he’s a spectator of sorts who is awed by the great names of golf.

Moe is 37, owns 17 course records in Canada and another seven in Florida – but asks advice from any amateur he happens to be paired with.

He can’t be interviewed – has only three confidants among the working press– because one columnist once cut him up badly. The only story that can be written is by following him around the course, providing one is in top physical condition.

HE STEPS up to the tee, grips his club as if it were a piece of garden hose, squints down the fairway, drops his gaze to the ball and …whap – the ball is gone.

He strides off in pursuit, as if afraid the ball might be gobbled up by the ground if he doesn’t get there fast.

He stops, whips out his club, steps up, glances furtively toward the green, drops his gaze to the ball and . . . whap – the ball is gone.

On the green, he seldom appears to line up the putt, never, makes the pantomimed swing, but the strikes the ball quickly and surely. If it fails to find the hole, he looks about in amazement as if asking, “How could that happen?”

BUT NORMAN, the man who plays out of Gilford a little town near Barrie, has other qualities or habits that must be mentioned.

He has mastered the art of bouncing a golf ball off his club with a gentle tap, tap, tap as he walks down the fairway or stands around waiting for someone else to hit.

There is another story about Norman teeing off the top of a soft-drink bottle in a regular tournament.

But that was years ago, and now Norman dresses as fashionably as any golfer on the circuit and confines his trick shooting to the home range.

HE SAYS he can’t remember ever missing a payday in a Canadian tournament, except for the Canadian Open, during his 12 seasons as a professional.

He’s a non-stop talker on the course, although to no one in particular, and the fastest player in the world.

And Norman is fast in other respects. On many occasions he has won top prize at a tournament and when officials looked around to present the prize. . . whap he was gone.

By THE CANADIAN PRESS