What I Learned from Moe Norman

After returning from the Asian Golf Tour in 1991, I decided to begin working on my golf swing to improve my game. I had never taken lessons before but thought since most of my tour friends had coaches that I would find a well-known golf instructor and begin work on my game. After three months of trying different coaches, I ended up in Dallas, Texas where I would spend the next three years working on my swing with my coach. After three years, hitting hundreds sometimes a thousand balls per day, my golf swing and my golf game was worse than when I began my instruction. My scores had INCREASED and I stopped playing golf, tired of the frustration and tired of the game. I figured one of three things, that I was either not talented enough, that the golf method I was learning was too difficult. But I guarantee that very few people have spent more money than I had trying to learn to play the game of golf.

Then a college team mate, Matt, who was playing on the Canadian Tour came to visit. As we discussed golf, he mentioned a man named Moe Norman. I had heard of Moe and even had seen a video in the office of my golf instructor but I never really paid much attention. My friend described Moe and his accuracy and his amazing ability to hit the ball at the target. He described how Moe was different than most professional golfers, but no one could hit a ball as well as Moe Norman.

I was a bit skeptical mostly because I thought that I knew a lot about the golf swing especially after spending the last three years with one of the most well-known instructors in the country. But, Moe Norman was even harder to deny when Matt pulled out a video tape of Moe striking balls for a crowd and in the crowd I saw dozens of professional golfers that I had played golf with over the years.

I decided that there was only ONE way learn about Moe Norman and his great golf swing, that was to meet him. In May of 1994, I drove to Chicago, IL where Moe was performing a ball striking demonstration. In all of my years as a professional player I had never seen such a great display of ball striking, more importantly, I had never seen such a Simple and Repeatable golf swing. 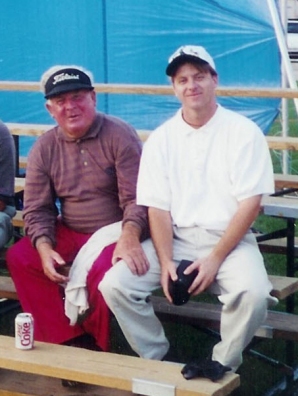 That afternoon, I introduced myself to Moe and we hit balls together and discussed his golf swing. Since that time, I implemented the ease of Moe’s his swing mechanics and qualified for the Canadian Golf Tour in 1995, was featured in Golf Digest in December of that year and was nicknamed “Little Moe”.

Since that day I met Moe, my golf game and golf-life have never been the same. I have performed over 300 demonstrations and taught over 1500 people discussing and demonstrating to all levels of golfers that it is easy to learn to swing like Moe.

It has been a privilege knowing Moe Norman and a pleasure sharing his insights to the golf swing as I “Bridged the Gap” between swing mechanics and the feelings of the Swing to which Moe so graciously taught me over the years.

Learn to Swing Like Moe on VHS or DVD

In 2000 I started the Graves Golf School traveling to various locations across the country to help people learn to Swing Like Moe.  In the process we recorded our instruction information which in now available to the public on VHS or DVD versions. If you are interested on learning about Moe Normans famous golf swing and the simple reasons he is regarded by the pros as the best ball striker that has ever lived please give us a call at (866) 377-2316.