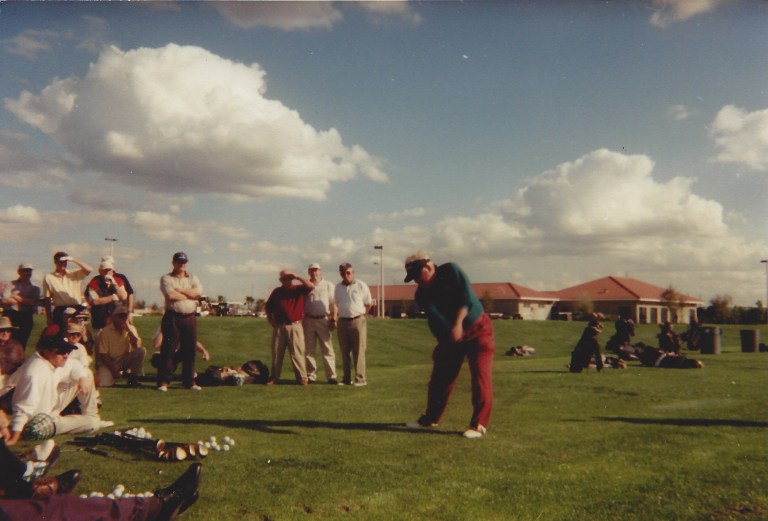 It was a typical day planned with Moe. As the sun broke the horizon, I left the parking lot of my Orlando hotel room to make a one-hour commute to Royal Oak Golf Club in Titusville. Moe didn’t have a phone so my call to the head professional the previous day would ensure that Moe knew I was coming to pick him up. As I pulled into the parking lot at the club, Moe was on the putting green waiting for me to arrive.

We were headed to Orange County National to perform a clinic for 65 professional teachers. These types of events excited Moe because he could feel comfortable and “talk turkey” which meant he could speak the same language of golf with like-minded professionals.

Moe picked up his bag from the edge of the green and hoisted the strap over his shoulder. He briskly walked toward me as I opened the trunk of the car. Dumping the bag into the chest. “Can’t wait for today, I changed my move. I can’t wait to show everyone”.

“What are you talking about Moe?” I asked.

As we got into the car, I anticipated an enjoyable hour-long drive back to Orlando. “What did you change Moe?” I asked.

The clinic for the professionals was important. It was a way to show the instructors Moe’s simplicity and his swing. They would often ask questions, and Moe would teach them about what he was feeling. Moe’s “I’m more level” comment concerned me. I was apprehensive that “talking turkey” with the pros might mean disaster. I needed to find out more about what Moe was thinking.

“More level? Moe, I’ve seen you hit thousands of balls, and your swing has never changed. Whatever you mean by more level just don’t say anything to the teachers today. I don’t want to have to explain to them what you mean, ok?”

I knew I was in trouble. Moe wasn’t letting go. He was ready to tell the pros his latest feeling in his swing, and I had no idea what he was talking.

When we arrived at the course, the group of professionals was already gathered on the range. They had formed a semi-circle around a hitting area with a bucket of range balls waiting for me and Moe to arrive.

In usual fashion, I tugged Moe’s bag out of the trunk. Slinging them over my shoulder, I began walking to the group gathered on the range. I figured that Moe would follow his clubs. Otherwise, he might wander away to avoid the crowd.

The crowd parted as Moe followed. I laid the bag down next to the balls. I kneeled next to watch the show. Moe lifted the bag pulling out a handful of clubs. The last one was his wedge. With the wedge in one hand he picked up a ball with the other hand, Moe addressed the crowd.

I lowered my head in dismay. I was horrified.

The crowd was bewildered. Moe again pointed at me looking at the ground hoping I was invisible.

Moe began hitting balls. He was in his element displaying his elegantly powerful and straightforward swing. Moe grabbed the seven iron lying in his bag.

Moe continued to color the sky with the stripes of flying golf balls. Enjoying the shots, he would make comments. “Oh, how pure.” “Watch this.” Then, about every third or fourth shot, it would come out again.

“Watch this for the level.”

There it was again. Level. Moe kept saying the ugliest word of the day. The started looking at me. “What does he mean?”. I had no idea what Moe was talking about so played along. “You’ll see, keep watching. You’ll see”.

Without hesitation, Moe looked at Tom and said.