If you are just beginning to play golf you might view the game as a sport or recreation. This is where most golfers start the game and sometimes leave it, unaffected by its allure. If you play golf long enough it can awaken something inside and you eventually realize that golf can be, and usually is, a spiritual experience. In March 1997 I encountered one of these spiritual experiences playing the greatest golf venue on the planet, Augusta National Golf Club, with the greatest ball-striker in the world, Moe Norman. That year, Dave Spencer held the head professional position at Augusta National. A long-time fan of Moe’s, Dave’s fondness for Moe grew out of his many visits to Augusta over the years as well as the legend Moe had become. 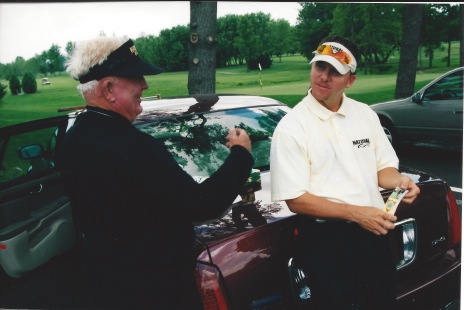 Dave offered Moe an open invitation to play at Augusta anytime he wished.

When asked if he would like to go back and play at Augusta, he accepted, in a way that only he could.

Every golfer has affection for Augusta National Golf Club. Constructed by Bobby Jones in 1934, the year of the Masters Tournament, Augusta is revered as golf’s “Mecca.” Originally built on the grounds of a nursery, each year the best players in the world gather at Augusta to compete in the Masters Tournament. Azaleas remain and decorate the landscape throughout the grounds making the tournament one of the most beautiful and memorable venues in the world of golf.

Moe, twice the Canadian Amateur Champion, participated in the Masters in 1956 and 1957.

Like all players, Moe understood the eminence of Augusta. He kept his most prized possessions, his Masters’ pins, in the glove box of his Cadillac and in a moment’s notice would show them to anyone who was interested. One day, while in Moe’s car, I asked to see the pin.

“Ok, do you want to see a million dollars?” Moe asked.

Then, glowing with pride, Moe showed me the Masters towel which lay on the front seat of his car.

“Wouldn’t sell it for a million dollars,” Moe said.

I was determined to get Moe back to Augusta.

Natural Golf’s previous owner Larry Olson and I were planning on traveling with Moe to the opening of a driving range in Tampa that year. We decided to make a three-day trip out of it, the first day playing at Augusta. The trip was one of many Moe Norman adventures of which I had the privilege of participating. I loved playing golf with Moe each time discovering a bit more about the man, his demeanor, and his character. He made the game seem so simple and I always learned more about golf and myself whenever I was with him. I found Moe to be not only talented but also generous and empathetic. I knew that playing Augusta with Moe would allow me to deepen my relationship with him and hear his story about the playing at the Masters. It is no surprise that around with Moe at golf’s Mecca would indeed be enlightening.

Many consider Moe to be “different.” He and I often talked about how his “differences” affected his success as a PGA Tour player. Moe mentioned his experience at Augusta in 1956 when, after 36 holes he received a lesson from Sam Snead. Moe hit so many balls that evening that his hands were raw the next day and he couldn’t hold the golf club. His compulsive act the night before forcing him to withdraw after nine holes in the third round.

Moe’s withdrawal from the golf world’s most prestigious tournament fueled the critics on the PGA Tour where he was often labeled “eccentric.” Our Augusta escapade began no differently.

Upon arrival to the parking lot at Augusta, we were greeted by caddies who warmly welcomed us and immediately informed us that cell phones were not allowed anywhere on the grounds. I began to grasp that I was in for a truly amazing experience. Anxious to get inside the clubhouse, I headed to the locker room to change my shirt. Moe changed his shirt beside the car, deciding that the parking lot was his place for a wardrobe change. The 40 years between his rounds at Augusta hadn’t had much influence on him. 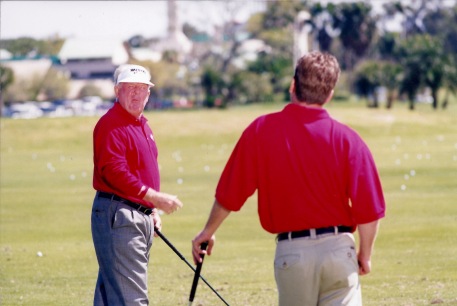 With our shirts changed, we headed to the practice tee to warm up. I was anxious and interested to see Moe hit a few balls. I never grew tired of watching Moe hit balls.

Moe warmed up with a few wedges, striking a few to the 50-yard target. Then he moved to a few full wedge shots, then a 7 iron, 5 iron and then to his driver. Moe hit each one of them perfectly. It didn’t take long before Moe was ready for the first hole.

Moe was known for his vivid memory of golf courses, rounds, scores and anything else he was interested in. Like his memory, Moe’s memories were priceless. Can you imagine? The greatest ball-striker in the world was introducing me to one of the greatest golf courses in the world. When I think about it today, it still gives me chills.

The first hole at Augusta National is an uphill par four with a slight dog-leg to the right. A bunker protects the right side of the fairway. Moe hit first. The ball landed on the left side of the fairway equal yardage with the bunker. My shot landed in the middle of the fairway bounding right stopping just short. “Fairway slopes right, keep it left,” Moe said.

With the hole located on the back portion of the green, I hit a 7 iron for my approach. The ball bounced over the back of the green and down a severe slope resting 10 feet below the green surface leaving a difficult elevated chip. Moe struck his approach to the center of the green approximately 25 feet.

“Never past the hole at Augusta, never long on one,” Moe chirped.

Augusta National has always been known for its treacherously fast, hard and undulated greens. Ben Hogan took 40 putts during his round in 1952 the same year that hole 14 averaged 3.5 putts per player to get the ball into the hole once they got onto the green. Originally built with Bermuda grass greens, Augusta National was converted to bentgrass in 1980 but the hard fast greens Augusta was known for have remained.

Players in past Masters Tournaments have often complained about the difficulty of the greens at Augusta. One-year Tom Kite commented that balls landing on the greens were landing so hard that they weren’t leaving ball marks. “It left what looked more like a burn mark,” Kite commented. Many of the slopes on the greens are not visible to anyone watching television but the players on the course know that a shot below the hole is a safe bet at Augusta.

“Never hit it above the hole. Keep it short if you can. Use the slopes. Have them work for you not against you,” Moe said?

“Too much spin, you lose control with too much spin,” Moe said. I realized that this was the reason for the lower than normal height of his shot into the green. His trajectory took the spinoff of the golf ball giving the ball a chance to bounce forward.

I was always learning from Moe.

Hole number 10 doglegs left and is a great hole for a right-handed golfer to draw the ball around the corner.

Moe said that this was one hole where a straight shot wasn’t the best choice. “Hit a draw on this hole, the fairway slopes left, you can get more roll,” Moe said.

Named by writer Herbert Warren Wind after the miraculous way Arnold Palmer played these holes to win his first major championship, an infamous part of Augusta National is the stretch of holes 11 through 13 which he gave the moniker Amen corner.

On hole 11, a 455-yard par four, Moe struck the best shot of the day hitting a 4 wood from the fairway to three feet from the hole, tapping in for birdie.

The size slope and shape of the green makes hole number 12, Golden Bell, one of the most difficult holes on tour. Moe and I both hit our shots to the back right side of the green. We then walked across Ben Hogan’s bridge.

Of all the rounds I played with Moe, he was particularly animated during this round. Moe was excited and complimentary as we completed Amen Corner and struck our shots off on the 14th tee.

“Best I’ve seen you hit the driver,” Moe said. “Thanks, Moe, what do you see different today?” I asked.

We finished the 14th hole and made our way to 15th, a reachable 500-yard par five. A good shot from the tee can carry far enough to strike the down-slope in the fairway allowing the ball to roll within mid-iron distance from the green. If the tee shot misses the down-slope, it can leave a long approach over Rae’s Creek. Many Masters Tournaments have been won and lost on number 15.

Moe and I both struck our tee shots missing the down-slope leaving 230 yards to the green. Known for its “upside-down” bowl shape and the false front sloping into the creek, some will choose to lay up from this position leaving a short wedge. That’s not why we came. We both struck 3 kinds of wood to the green, both balls finishing in Rae’s Creek.

Moe and I walked toward the green to drop another ball to strike an approach. Thinking it to be advantageous to drop as close to the green as possible, I continued to drop 50 yards from the green. As I dropped, I heard Moe strike his approach landing the ball 10 feet left of the hole. I looked back and noticed Moe approximately 100 yards behind me. I continued with my shot, attempting to hit a lob wedge. The ball rolled up the slope toward the flag. The ball stopped and then began rolling backward resting in Rae’s Creek. Taking another ball from my bag, I took another drop and struck another ball, once again rolling back into Rae’s Creek.

Moe knew the extreme difficulty of a wedge shot to the severely sloped green and had struck a 9 iron from 150 yards allowing him to have a full swing with better distance control.

Hole 15 ruined my chance to play well and so I realized that I was not playing Augusta for a low score that day but instead, feeling the spirits of the great players who had walked the grounds before me. I understood that playing at Augusta with Moe was about being in a special place with a very special person. Augusta National humbled me and at the same time lifted me to a new understanding of why I play golf.

As the sun was lowering on the final three holes, Moe and I walked together, mostly in silence, appreciating the richness of the green grass and the beauty of the trees. I couldn’t help but experience Augusta National as truly a sacred place.

From the drive down Magnolia Lane to the last putt on “Holly,” the final hole, Augusta had welcomed us with open Azaleas giving Moe and me an opportunity to commune together, learn more about each other, and revel in the spiritual nature of the game itself.