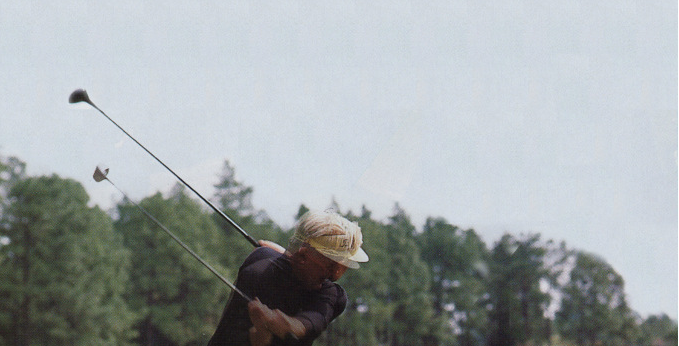 I have collected hundreds of newspaper articles and clippings about Moe. In 1993, Golf Illustrated ran a one-page story about Moe written by T.J Tomasi titled “The Best Swing Ever” followed by an article from Lorne Rubenstein titled “Moe Better Golf”.

This is the picture from the article. It is one of my favorite overlays showing Moe’s Single Plane.

Tomasi seems to have some understanding of Moe’s swing plane. Tomasi and Rubenstein mention how unorthodox it is relative to a conventional swing.

One thing I enjoy about Lorne Rubenstein is that he understands Moe and he certainly “gets it”.

Here is the entire magazine article: 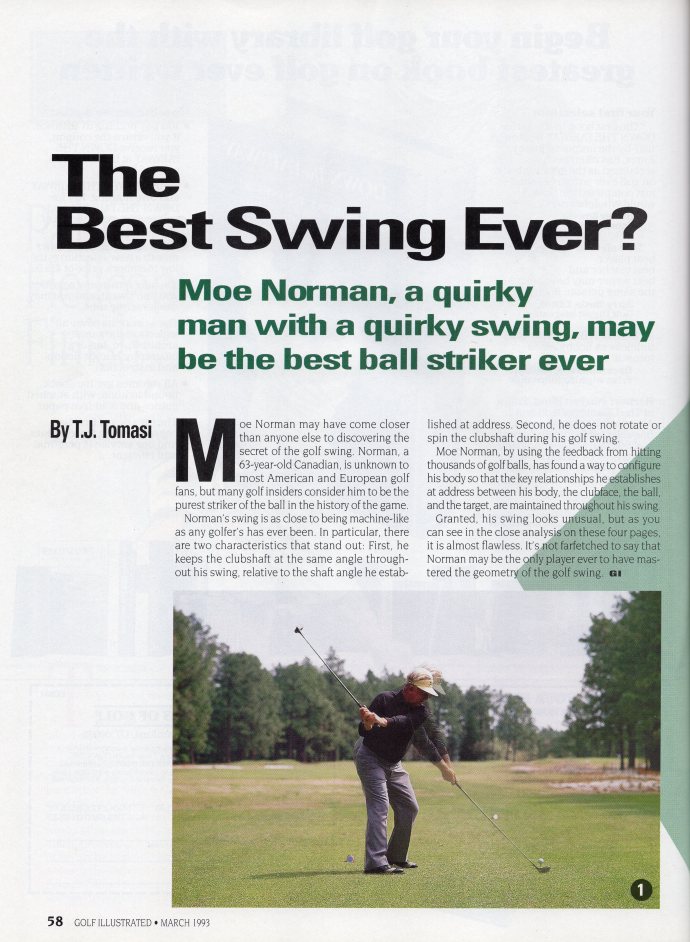 Moe Norman, a quirky man with a quirky swing, may be the best ball striker ever.

Moe Norman may have come closer than anyone else to discovering the secret of the golf swing. Norman, a 63-year-old Canadian, is unknown to most American and European golf fans, but many golf insiders consider him to be the purest striker of the ball in the history of the game.

Norman’s swing is as close to being machine-like as any golfer’s has ever been. In particular, there are two characteristics that stand out. First, he keeps the clubshaft at the same angle throughout his swing, relative to the shaft angle he established at address. Second he does not rotate or spin the clubshaft during his golf-swing.

Moe Norman, by using the feedback from hitting thousands of golf balls, has found a way to configure his body so that key relationships he establishes at address between his body, the clubface, the ball and the target, are maintained throughout his swing.

Granted, his swing looks unusual, but as you can see in the close analysis on these four pages, it is almost flawless. It’s not farfetched to say that Norman may be the only player ever to have mastered the geometry of the golf swing.

Moe Norman dazzles anybody who watches him hit a golf ball, including the game’s greatest players. In response to a question about pure strikers of the ball, Tom Watson said, “Hey, I’ll tell you about a guy who can hit it better than anybody. His name is Moe Norman, up in Canada.

Norman uses a self-taught style that seems to defy convention. Whereas most golfers arrange themselves loosely at address, Norman appears rigid. He stands far from the ball, arms stretched to the limit with his feet wide apart.

The extension of Norman’s club, both back and through the ball, is pronounced and accounts in part for his uncanny accuracy. Norman demonstrates this extension by placing a silver dollar on the ground exactly 37 inches behind the ball. The sole plate of his driver brushes the coin every time on his backswing. Then he moves the coin exactly 22 inches ahead of the ball and contacts it every time after impact, his clubhead brushing the ground that far along. Each shot is straight and every swing is a carbon copy of the one that came before.

As unusual as Norman’s style is, he is also a different person from most golfers. Indeed, he is considered eccentric, and always has an original way of responding to a question. During one tournament, when a fellow pro asked him why he quit after three holes, Norman explained, “I hit the flagpole the first three holes. Why go on? Can’t do any better than that.”

Such Norman comments are legend in golf. It seems that every golfer has a Moe Norman story. Paul Azinger, for one, was amazed when he first came across Norman.

“I couldn’t believe what I was seeing,” Azinger told me one day, shaking his head at the recollection. “It’s 100 degrees outside, and here comes this guy in a long-sleeve turtleneck. I watched him hit drivers at the 250-yard sign, and he never hit one more than 10 yards left or right of the marker.”

Norman’s skills have brought him some 50 pro tournament victories along with 33 course records. When he turned 50 in 1979, he won the next seven Canadian Professional Golfers’ Association senior championships. His talent is unquestioned, but he somehow never succeeded on the U.S. PGA Tour and refused to try and qualify for the rich Senior PGA Tour. His prowess with a golf club begs the questions, Why hasn’t he succeeded on the world’s tours, and, Why isn’t his name all over the record books?

I believe that the answer lies in Norman’s quirky personality, with which I have been fascinated since firs encountering him when I was a youngster and he would entertain golfers at night at a Toronto driving range. Norman suffered then and to an extent still suffers from an inferiority complex so pervasive it has kept him out of mainstream of golf.

Professional golf, after all, involves more than hitting the ball. There are interviews, social obligations, and standards of dress and conduct to be followed. Norman’s shyness made him awkward around people. He did not conform to their expectations, and often aroused their enmity.

“I think that if someone would have taken Moe under his wing,” Lee Trevino points out, “and said ‘Look, we’re going to play here, and don’t be afraid of the questions because I’m going to tell you what to say,’ then he would have been OK. I think Moe just didn’t want to deal with the media and with the public. He’s a very shy person and he doesn’t want to be around a lot of people who try to take advantage of him.”

And so it was, in 1958, after only one winter on the PGA Tour, that Norman declared he had had enough. “I didn’t feel at home there. I always felt the players were superior to me, that they were gods, and I was their servant.”

Thankfully, Moe has become more at ease around people as the years passed. He is often called to talk at golf gatherings in Canada, and during the last couple of summers has given clinics across the country for a few hundred dollars apiece. He still drives in his car alone, from place to place, and lives, alone, in a room in Kitchener, a city some 60 miles west of Toronto. The Royal Canadian Golf Association has yet to admit Norman to its Hall of Fame, and that, too many golfers who know of his abilities and accomplishments, is a travesty.

But perhaps it is more important that Norman is still enthusiastic about golf, and lives for the game. There is nothing quite so magical as watching him fire balls from the fairway one after the other, straight and pure. He is an enigma, but he is a giant talent. And he says that he is happy because he has golf.

“I couldn’t mix with people when I was younger.” Norman recalls softly. “And i didn’t think it was important to mix with them. I knew I was never going to be an alderman or a mayor of a city. All I ever wanted was to become the straightest hitter the world has known and to get the goddamn ball in the hole.